Hello, Alice here. Three years ago, like many of us, I had had just started to get interested in cryptocurrency. At the time of the cryptocurrency boom, I didn’t know many of the terms used by traders, bloggers, and experts. Now, I want to tell you the essential terms to be aware of in the crypto space. I’ll let you know what a novice user needs to know to hold their own in any conversation about cryptocurrency.

We have divided the terms into four categories: cryptocurrency, blockchain, mining, and trading.

Bitcoin is the first cryptocurrency. It was released in 2009 by a man (or group of people) disguised under the pseudonym Satoshi Nakamoto. At the moment, bitcoin is the leader of the crypto market, with a 59% share.

Cryptocurrency is a digital asset and, at the same time, a payment system that uses a cryptographic function to encrypt records. Cryptocurrencies are based on distributed ledger technology — blockchain. Cryptocurrency is considered an alternative to fiat money, which is issued by the state.

Altcoin is a term that describes all digital assets that are alternatives to bitcoin. The first altcoins appeared in 2011. They were Litecoin and Namecoin.

Token is a digital asset related to a specific project (coin) and is issued based on a cryptocurrency. A token represents programmable assets or access rights, managed by a smart contract. It allows you to create other valuable assets based on the blockchain system. We can compare a token with shares linked to a specific currency, and their value depends on the financial market.

Stablecoin is a cryptocurrency that is underwritten by an asset or assets (e.g., fiat currency, commodities, gold, etc.) designed to minimize the volatility of the price of the coin/token. These cryptocurrencies depend on the value of the real asset they are linked to.

Shitcoin is a coin created to artificially raise the value of the currency and then sell it.

Ethereum is the leading altcoin by market capitalization. Developer Vitalik Buterin released it in 2015.

Address is basically a destination where a user sends and receives digital currency. In a way, it is similar to a bank account. These addresses usually include a long series of letters and numbers. Addresses can also be represented as a QR code.

Block is a list of transactions on a cryptocurrency network that were processed and confirmed by miners. Blocks are created once in a certain period, and most cryptocurrencies have different periods. For example, on the bitcoin blockchain, a block is generated once every 10 minutes. After forming, the block is added to the previously formed blocks connected in a chain.

Blockchain is a distributed registry consisting of a chain of blocks, each of which contains transactions. Each subsequent block is linked to the previous one. This sequence cannot be broken or modified, otherwise the cryptocurrency network data will become invalid.

Cryptography is basically the process of encoding and decoding information so that would-be observers are unable to understand the information being sent.

Wallet is an application for storing cryptocurrency. It allows users to access digital assets, transfer them to other addresses, and use them for payment and other purposes.

There are several types of wallets. Cold or hardware are wallets in the form of a separate device, similar to a flash drive, that saves your private key. They are considered the most secure since you can use cryptocurrency only if you directly access the wallet and know the password.

Browser-based wallets are wallets that are built into the browser as an extension.

Desktop wallets are special applications installed on your computer.

Exchange wallets are wallets that users receive when opening accounts on exchanges for trading cryptocurrency. This method of storing funds is considered the least secure.

Key is a set of characters that you need in order to gain access to a cryptocurrency wallet, a cryptographic code that allows a user to receive cryptocurrencies into an account. There are two types of keys. The public key is made available to everyone via a publicly accessible directory, and the private key remains confidential except to its respective owner. Because the key pair is mathematically related, whatever is encrypted with a public key may only be decrypted by its corresponding private key.

Smart contract is a specific algorithm written on the blockchain. Smart contracts are used for complex operations, such as issuing tokens or exchanging assets through decentralized applications.

Transaction is an operation on the blockchain, such as transferring coins between wallets or using a smart contract.

Fork is creating an alternative blockchain from an existing one. During a soft fork, a modification is made to the previous blockchain. During a hard fork, the initial chain of blocks is divided into two independent ones. As a result, a new cryptocurrency is formed. For example, a Bitcoin hard fork resulted in Bitcoin Cash. It later split into two new forks: Bitcoin Cash and Bitcoin SV.

Mining is the process of creating new units of a digital currency. For example, the bitcoin network releases new bitcoins every time a block is mined. In this instance, mining involves confirming transactions and combining them into blocks. This verification requires hardware and electricity, and miners are rewarded with digital tokens for contributing these necessary resources.

Mining incentive is the reward that miners get for confirming transactions and mining them into blocks. Verifying bitcoin network transactions, for example, requires specialized hardware and substantial electricity, so miners are compensated with a mining incentive.

Initially, bitcoin’s mining incentive was 50 BTC, but at the time of this report, the reward has dropped to 6.25 BTC.

Mining pool is an association of miners who collectively mine cryptocurrency. Multiple devices are combined to mine a block, and the reward is shared among all participants in the process.

Mining farm is several devices combined for cryptocurrency mining. Unlike mining pools, a farm is usually owned by one person.

Cloud mining is a type of mining that does not involve the purchase of hardware. The company purchases devices for cryptocurrency mining and rents them out on a remote basis.

Bulls (as opposed to bears) are market participants who expect an asset’s price to increase and buy or hold it to profit in the future. When a bull sells a cryptocurrency, it can switch to the bears’ side, who play for a lower rate.

Bears (as opposed to bulls) are market participants who are interested in a fall in the price of assets. They wait for the asset to fall in price to buy it at a better price, or they short sell.

Crypto dump is the deliberate sale of a large amount of cryptocurrency in order to bring down its price.

Whale is used to describe a trader who makes sizable bets. This term is a good one to know because market participants with the ability to execute very large transactions can potentially manipulate the market—or “make waves in the ocean.”

Volatility is the degree of fluctuation in the price of a cryptocurrency over a certain period. The higher this indicator is, the more expensive and cheaper the coin became, for example, within a month. Assets with greater volatility carry more risks, but at the same time, provide more opportunities to earn on strong fluctuations in the exchange rate.

Long or long position is a trade in which a trader or investor buys an asset and holds it with the expectation that its value will grow.

Pump is a deliberate overstatement of the price of a cryptocurrency. Several high net worth users can team up to “pump” a coin and then sell it to other users at an inflated rate. The pump almost always ends in a sharp drop, and the profit are reaped mainly by the organizers of the scheme.

Rocket is a slang term that means a sharp increase in the cryptocurrency price in a short time. On the asset chart, it looks like a large, green candle.

Moon (to the moon) is a process when the value of a currency increases very quickly. For example, a crypto trader could talk about how an altcoin is going “to the moon!”

Flat or sideways movement — a situation when the market or the rate of a particular cryptocurrency does not grow or fall but is squeezed in a specific range. For example, if the bitcoin exchange rate fluctuated in the range from $9,000 to $10,000 for a month, it means that it was flat the entire period of time.

Hodl is a slang term resulting from the incorrect spelling of the English word hold by a bitcoin user. It involves buying a cryptocurrency and storing it for a long period of time on the belief that its value will grow in the future. It describes “Hold On for Dear Life”.

Hamster is a novice trader who tends to make erroneous decisions due to panic and emotions.

Short is a trading technique in which a trader borrows an asset in order to sell it, with the expectation that the price will continue to decline. In the event that the price does decline, the short seller will then buy the asset at this lower price in order to return it to the lender of the asset, making the difference in profit.

51% Attack is when more than 50% of the miners on a blockchain launch an attack on the rest of the nodes/users in an attempt to steal assets or double spend.

Airdrop is a marketing campaign that distributes a specific cryptocurrency or token to an audience for free. Tokens can be obtained just like that, or for performing simple tasks such as registering on the platform or inviting other traders to register.

“ATH” is an abbreviation of “all-time high.” This term can be quite helpful to know for tracking digital currency markets. These assets are so volatile, so keeping their ATH in mind can prove valuable. A digital currency could potentially hit several local highs before rising to a new all-time high. For example, the bitcoin exchange rate set its ATH in December 2017 at $19,665.

Decentralized Application (Dapp)  is a software that does not rely on a central system or database, instead it shares information amongst its users via a decentralized database, such as a blockchain.

Decentralized Finance (DeFi) is a sphere of decentralized services, including exchanges and platforms for making deposits and issuing loans, secured by cryptocurrency.

Initial Coin Offering (ICO), or initial coin offering, is the process of attracting primary capital using cryptocurrency, similar to an IPO on the stock market. The project sells its tokens to investors and uses the proceeds for development. ICO participants hold the purchased tokens in the hope of future growth in their value.

Initial exchange offering (IEO) is an alternative to the ICO. The principle is the same, but the project organizes the initial sale of tokens using a specific exchange. 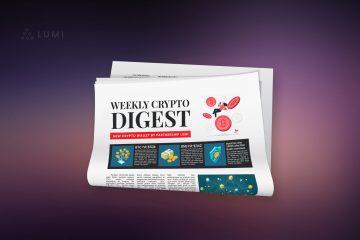