What we have all anticipated for so long has finally happened: Summer, at least in a calendar, has started!

And EOS has conducted their #B1June presentation, experiencing an almost 20% drop in price the following days. But is this truly a black week for EOS or just a usual “Buy the Rumor, Sell the News” market disturbance? And what, behind all the buzz, was actually announced? Worry no more, enjoy the sun, and don’t forget about the sunscreen – we’ve got all the EOS controversies of this week covered for you.

The event was highly anticipated by the EOS community and crypto investors, so all kinds of rumors were spread around from EOS adoption for 2020 elections in the USA, to collaboration with Apple or Facebook. Bloomberg stirred the pot, breaching the embargo agreement with Brendan Blumer on a major announcement, adding even more fuel to conspiracy theorists.

So, for a couple of days after the event had finally taken place, half of the comments in related threads said “and that’s it?” in one way or another. But after the hype and prejudice had settled down, we could calmly analyze what that “it” was really about.

The informative part of the event took no longer than half an hour and can be divided into three parts:

1. Coinbase, in collaboration with Block.one, reported that they are adding the EOS blockchain to Earn.

Earn is a platform that allows everyone to learn about cryptocurrencies and earn their first crypto assets for it. Raising social awareness on crypto, Coinbase recently secured three million views on Earn. Currently they are adding five lessons about EOS, and after finishing them all, students will get $10 worth of EOS tokens.

This collaboration shows that Block.one bets on long-term goals, such as lowering the entrance bar for newcomers and seeking different ways to accelerate the mass adoption of blockchain tech. And the best way to get a new customer base tomorrow is to educate it today.

Dan Larimer, CTO of Block.one, shared his plans for future technical improvements of the EOS architecture. The new protocol EOS VM, when fully implemented, will increase the speed of transactions up to 12 times as compared to the numbers of a previous year. It would allow dapp developers to outperform competitors and give a technical basis for the expansion of the ecosystem.

And the most discussed announcement: Social media platform Voice.

Swords won’t stop crossing in all discussions about #B1June. People are heatedly guessing if it would be the “Steemit 2.0” that nobody really wanted or a project that tests the true capabilities of EOS, or even a long-awaited Facebook-killing, free speech haven from censorship and control over user data.

The truth is, it’s just the announcement of a big project on a day that is an important anniversary for EOS. Speculation will happen, but currently, it’s only the intention to tackle a long-standing issue. Brendan Blumer formulated it perfectly: “Social media has not been a good friend to us.” And that’s true – nobody could object, data harvesting and bot swarms aren’t affecting our everyday internet-life directly.

Dan Larimer claims that Voice won’t sell personal information to advertisers and will not collect users data as Facebook does. Even that, in itself, is already a big move forward.  it will provide the opportunity for users to control their information via inside tokens, which are earned through posting and commenting. There would be some form of personality validation that would help avoid bots and hold people accountable for their actions. And that’s it. Everything else, for now, is pure speculation.

So what do we have in the end? Block.one celebrated the anniversary with a big event, introduced a major partnership, a major update, and new big product. Why, then, is there so much resentment being spilled in comments? There might be an answer: because people expect from EOS, and the crypto industry in general, much more than it can give right now.

And the only mature answer of developers that truly dream of innovation and mass adoption of blockchain tech is to stay calm and work hard on improving their products and tools for other creative minds, leaving speculation and controversies to traders and newbies.

Oh, boy, have we had a lot of them this week. We’ve already mentioned the Bloomberg one, but that was just the start of the flood.

Dapps are useless, boldly stated AnChain, a Blockchain analytics firm. The problems are visible: Dapps have not been able to reach the level of users that had originally been anticipated, decentralized exchanges suffer from low liquidity, and the price of in-game assets has dropped dramatically.

It has to be pointed out that AnChain only reviewed dapps on the EOS blockchain, given that, currently, the network is the biggest dapp platform out there. It wouldn’t be too hard to do some further research and check the Ethereum network and realize that they too suffer from all the same issues, plus low transaction speeds.

So, we are coming back to two major problems in the crypto world: transaction speed and the need for mass adoption. Any major blockchain developer that wants to stay in the game and preserve the game itself, has to focus on solving these issues.

Another statement from the AnChain report is that just a quarter of transaction are made by people, the other 75% is made by bots. For busy people that avoid reading through a header, this statement combined with words “study” and “research” is a clear indicator that EOS is a hollow desert.

But that’s just not the case: EOS is designed that way, to allow automatic transactions. Because EOS transactions have no transaction fees, the network charges dapp developers storage fees instead, paid in cryptocurrency and RAM. And many of those transactions are, for instance, just users perfecting gaming strategies using bots for thousands of automatic actions to get the data.

However, it is true that while we are used to measuring success in user activity, this model is “difficult to understand, regulate, operate, and secure”, as AnChain points out, and it’s wise to take any stats from dapp ranking sites with a pinch of salt.

EOS is not a blockchain

Here we didn’t even have to come up with a catchy headline. “EOS is not a blockchain, it’s a glorified cloud computing service” – this sparkled a Chernobyl-sized explosion in internet discussions. People took two opposing camps: one consisted of readers, that read half an article, others stayed to hear the end of the story. Who is right? Let’s find out.

The benchmarking firm, Whiteblock, conducted an experiment running a replica of EOS, which claims to work the very same way as the real thing. They ran some tests for two months and came to the conclusion that EOS is not exactly as fast as it claims to be. Because in their benchmark, transaction speed did not exceed 250 transactions per second (TPS), while the current belief is that the maximum throughput of EOS is 4,000 TPS. To compare: Bitcoin is currently capable of processing up to 7 TPS, and Ethereum can process around 20.

And some other dangers of EOS are its potential to be controlled by cartels (bad actors banding together to take advantage of the EOS voting system) and lack of true cryptography used in transactions, with Chainbase storage making it more of a centralized computing server, than decentralized nodal community.

So, is it true? Authors reached out to EOS developers. Answers were short and simple:

1. Chainbase is just a method of storing real-time information. Cryptography is used for validation by block producers. This means that EOS is decentralized and uses cryptography, therefore, is a blockchain.

2. Cartels could potentially be formed in any sphere, but EOS is protected from that by active inclusion of regular users in the voting system. The malevolent activities hardly can pass unnoticed and the solidification of these checks and balances is the main priority of the community and developers.

3. To approve or disprove results of a test, another one is needed, but 250 is still more than 7, right?

And coming back to conspiracy theories: Consensys is heavily invested in the Ethereum blockchain ecosystem, the primary EOS competitor.

What can be learned from all the controversies? That it is good to have them if they inspire healthy discussions. Block.one is no stranger to controversy, but until it can defend its argument, any doubts and accusations play into their hands in the long run. Because in the end, the truth after a pinch of salt gets even tastier.

With the big event and flaming discussions addressed, this week otherwise appeared to be quite peaceful. While everyone was focused on prices and arguments, EOS New York focused on what is needed to implement Voice – and it is EOSIO v1.8, drawing a potential roadmap to this version.

EOSwriter pointed out that while we were all distracted, Dan Larimer silently released a multi-year roadmap for Block.one. Also, they conducted interviews with both Dan Larimer and Brendan Blumer. We’ll surely give our review of this document in the next digest.

And EOS holders voted to reduce annual inflation from 5% to 1%, with overwhelming approval.

So what have we learned today?

Events come and go, controversies fire up and fade out, but development goes at its own pace, headed towards the common goal of all crypto folk – new, sustainable, smooth systems, where the people are in charge.

That’s why instead of worrying, take that sunscreen and go outside to soak up a piece of summer, which, unlike our crypto revolution, will someday end.

See you next week! 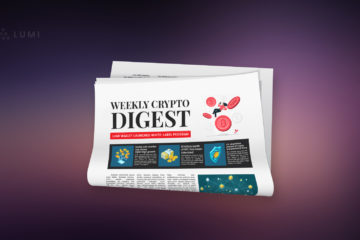